It’s been close to 25 years since I decided to retire my trusty Rapidograph X500, with added Comfort Grip, Turbo Flow, and Steadycow. (I especially loved that last option.) That was a nice pen. We went places. But just around the time the two of us were emerging from our adventure down one rabbit hole, another one suddenly loomed.

Back then, the Internet was a cute little Internet-ling, its cold, digital eyes just starting to open. The first website (I just looked this up) debuted only a couple years prior to my retirement, Google came along several years later, and Facebook was launched a full decade after I had drawn my last cow. Meaning, like most of my generation, I was pretty much clueless about this new technology that was on the rise. Hell, I was still marveling at the wonders of my electric pencil sharpener. (I splurged.)

But as the digital world gathered speed, I was as excited as most of us who lived outside the tech world (and back then, as a cartoonist, you couldn’t get much further outside of tech unless maybe you were a coal miner) and were seeing all these amazing tools unfold. Tools to help us better communicate, write, explore, and learn. (Of course, soon to be adding hack, steal, exploit, deceive, bully, and maybe destroy democracy, but hey, what’re a few wrinkles? We’ll figure this out. Or not.) Naively, I now realize, I never once foresaw any connection between this emergent technology and my cartoons. I had spent years drawing The Far Side for (real) newspapers, which segued into (real) books and (real) calendars. These, as some of you may recall, were rather quaint, three-dimensional objects that could also double as flyswatters. What did the Internet have to do with me? Cue the scary music.

Okay, “scary” might be a little melodramatic, but years ago, when I slowly started realizing I had a second publisher and distributor of my work, known as Anyone With a Scanner & Associates, I did find it unsettling enough to write an open letter to “whom it may concern,” explaining — best as I could — why I preferred that the people doing this would kindly refrain. I won’t rehash it all here, but my powers of persuasion had at least some impact, and many of my fans were very understanding and responsive. Maybe it takes a warped mind to understand a warped mind. (No, seriously, my thanks to those who removed my cartoons willingly, or even begrudgingly.)

So fast-forward to today, and hey, look! I’m writing another letter! This time, though, I’m writing to say something I never thought I would: Welcome to The Far Side website! Guess I’ve got some ’splainin’ to do.

Truthfully, I still have some ambivalence about officially entering the online world — I previously equated it to a rabbit hole, although “black hole” sometimes seems more apropos — but my change of heart on this has been due not only to some evolution in my own thinking, but also in two areas I’ve always cared about when it comes to this computer/Internet “stuff”: security and graphics.

Okay, so better security is, of course, just better security. But it helps. If they wanted to, I’m sure the Russians could get inside this thing and start messing with my captions. (I know they’re thinking about it!) But the other one — the advancements in graphics — has been a big incentive for me. Man, did those old computer screens suck when it came to visual nuances. I’ll make up an example: Let’s say I’m going to draw a group of vultures who are scavenging the remains of some poor soul who got lost in the desert, and one of them has encountered a glass eye. (You can see the potential already.) This could probably go several ways, but I’m thinking the bird is excited about his discovery and is telling his buddies he wants to take it home and show his kids. Whatever, I already know there’s a lot to capture in this scene, while trying not to overcomplicate it. Some things have a bit of leeway, but that glass eye? That has to be juuuuuust right, or this thing is damaged goods, if not blown. As for seeing it on an old computer screen? Fuhgeddaboudit. But things have changed. On today’s computers and devices, voilà! — you’re definitely going to see that small, dispossessed eye. I could even add a hint of blue. Ah, yes. Nice eye. (I apologize to anyone who either doesn’t appreciate glass-eye humor or has lost a loved one in the desert, but I’ve got to finish this thing and that’s what jumped in my head.)

Finally, I also concede I’m a little exhausted. Trying to exert some control over my cartoons has always been an uphill slog, and I’ve sometimes wondered if my absence from the web may have inadvertently fueled someone’s belief my cartoons were up for grabs. They’re not. But it’s always been inherently awkward to chase down a Far Side–festooned website when the person behind it is often simply a fan. (Although not everyone is quite so uncomplicated in their motives; my cartoons have been taken and used to help sell everything from doughnuts to rodent control. At least I offer range.) So I’m hopeful this official website will help temper the impulses of the infringement-inclined. Please, whoever you are, taketh down my cartoons and let this website become your place to stop by for a smile, a laugh, or a good ol’ fashioned recoiling. And I won’t have to release the Krakencow.

So here we go. I hope you enjoy TheFarSide.com. I’m very grateful to the digital team at AMU, my longtime publisher, for all their input and hard work on this project. And for those of you who are familiar with The Far Side, and perhaps wishing it had been online before now (as opposed to those who are familiar with my work and have an opposing view), thank you for your patience. I hope all the reasons I’ve given here help explain why I’m so late to this party. But I’m finally here. And I could use a drink. 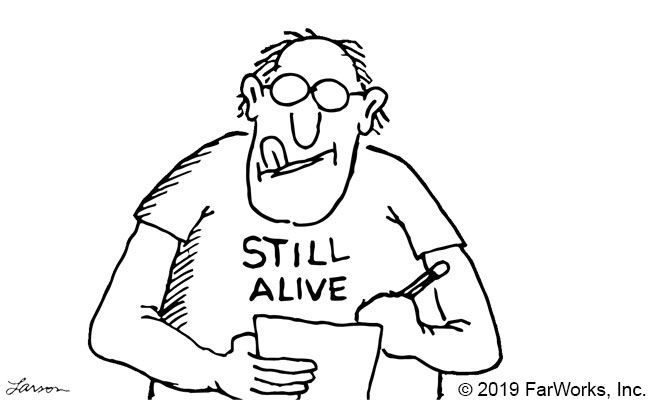 It’s been close to 25 years since I decided to retire my trusty Rapidograph X500, with added Comfort Grip, Turbo Flow, and Steadycow. (I especially loved that last... 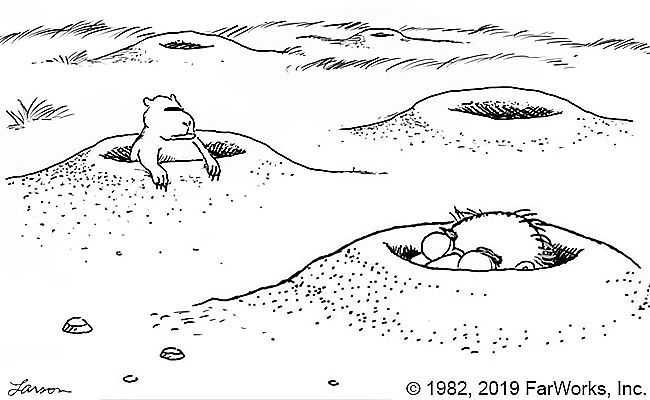 Gary Larson was born August 14, 1950, in Tacoma, Washington. Always drawn to nature, he and his older brother spent much of their youth exploring the woods and swamps of the...